Welcome to some new representatives on the SRC. Miley, Thomas and Rowan.

We are exploring a new way for student voice through the SRC using a parliamentary system. The students individually or in groups, or possibly as a whole class can write a motion that is presented to the SRC for their consideration and discernment. When the SRC make a decision to endorse a motion, they pass the motion on to the Senate (the school staff) for consideration. If your child has an idea that is plausible for action at school you could talk them through the process for making a motion. The motion slips are in each classroom.

On the note of student voice I had the honour and privilege with Mrs Perryman this week to adjudicate our Stage 3 Public Speaking. We were SO impressed with the quality of the speeches that the students have written and presented and congratulate all the students who presented their speech to us.

Caitlyn Healey and Lincoln Thompson and reserve Ivy Smith for being our Year 5 representatives at the Southern Region Public Speaking finals.

Sophie Stroud and Sofara Jones and reserve Maya Koellner for being our Year 3 representatives at the Southern Region Public Speaking finals.

Blessings on a springtime family weekend.

We are creating a culture of learning. How can you help?

Prepare kids for problems and contingencies

You may coach your child to be independent – walk to school, make their lunch, answer the phone– but do they know what to do in an emergency? What happens if they come home after school and the house is locked? Who do they go to? Discuss different scenarios with children whenever they enter new or potentially risky situations so that they won’t fall apart when things don’t go their way. Remember, the Boy Scouts motto – “Be Prepared!”

Sometimes you’ve got to show faith in children. We can easily trip them up with our negative expectations such as saying “Don’t spill it!” to a child who is carrying a glass filled with water. Of course, your child doesn’t want to spill it but you’ve just conveyed your expectations with that statement. We need to be careful that we don’t sabotage children’s efforts to be independent problem-solvers with comments such as, “BE careful!”, “You’ll be okay, won’t you?”, “You’re not very good at looking after yourself!”

Would a child who accidentally breaks a plate in your family while emptying the dishwasher be met with a ‘that’s really annoying, you can be clumsy sometimes’ response or a ‘it doesn’t matter, thanks for your help’ type of response? Hopefully it won’t be the first response, because nothing shuts down a child’s natural tendencies to extend themselves quicker than an adult who can’t abide mistakes. If you have a low risk-taking, perfectionist child, consider throwing a little party rather than making a fuss when they make errors so they can learn that mistakes don’t reflect on them personally, and that the sun will still shine even if they break a plate, tell a joke that falls flat or doesn’t get a perfect exam score.

As I’ve often said your job as a parent is to make yourself redundant (which is different to being irrelevant) at the earliest possible age. The ability to sort and solve your own problems, rather than step back and expect others to resolve them, is usually developed in childhood. With repetition and practice problem-solving becomes a valuable life-pattern, to be used in the workplace, in the community and in family relationships.

Personal problem-solving is an under-rated skill shared by resilient children and adults. First, identified alongside independence, social connection, and optimism by early resilience-researchers in the US,
the ability to solve your own problems is the basis of a child’s autonomy and self-effica
cy.

When parents solve all children’s problems we not only increase their dependency on adults, we also teach kids to be afraid of making mistakes and to blame themselves for not being good enough. As I noted in my book Anxious Kids, this is fertile ground for anxiousness and depressive illness.

So how can we raise kids to be courageous problem-solvers rather than self-critical, low risk-takers?  Here are six practical ideas to get you started:

Turn requests for help into problems for kids to solve

Kids get used to bringing their problems to parents to solve.  If you keep solving them, they’ll keep bringing them.

“Dad, can you ask my teacher to pick me for the team?”

It’s tempting if you are in a time-poor family, to simply jump in and help kids out. Alternatively, you can take a problem-solving approach, cuing them to resolve their own problems and take responsibility for their concerns.

“What can you do to make her stop annoying you?”

“What’s the best approach to take with your teacher?”

The students who are preparing for their Sacrament of First Eucharist participated in their final family retreat on Sunday. Year 6 students facilitated a range of games for the candidates and were interviewed by Fr Luke to share their insights about celebrating meals as a family. Please keep the candidates in your prayers as they prepare for the Sacrament on 17th September.

We started with a question today; How do you heal? The students thought about their answer and in silence they experienced yoga and  mindful colouring  in.   Does going for a walk help you heal?  Chatting with a friend help you heal?  Does listening to music help you heal?    What is your “go to” healing place or space?

Often in our busy-ness we forget to take time alone for ourselves to recharge and to heal.  The Mindfulness challenge this week for the Empowered students is to spend 5 minutes each day doing an activity that brings healing to your mind, body and spirit.

"The light in me knows the light in you is AWESOME....so let your LIGHT shine”

This week we had a meeting for the leaders to share their highlights of leading the clubs and to plan for the next three weeks.   The enthusiasm that these leaders share is inspiring.  Keep shining your light.

Thank you to the families who have paid their Term 3 School fees, a reminder Term 3 school fees are due Friday 11 September.

A reminder to all parents and carers that student supervision at St Patrick’s commences at 8.30 each morning. We ask parents to ensure that children are not at school prior to 8.30am.

If you have extenuating family circumstances on any day or week where you need to make arrangements for an earlier arrival for your children this MUST be negotiated with our principal Jo. Please email or phone the school to make a time to discuss your family needs and we will work to create a short term plan with you.

Book Club is due Friday Week 8

THE SHOW MUST GO ON 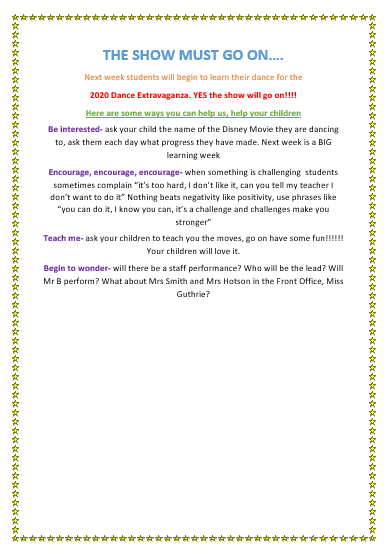